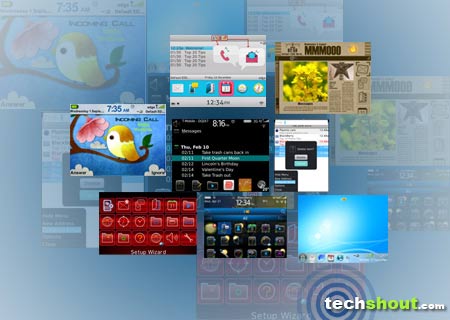 Here we have compiled our list of free BlackBerry themes for your smartphone. Have you, like everyone second person, always associated BlackBerry with suits and slim briefcases in spite of RIM’s efforts to play it light? We often find it hard to believe anyone would do something as frivolous as gaming on a BlackBerry even if they’re sitting in a waiting area, thumbs feverishly hitting the keyboard and an expression of being entertained on their faces. For the BlackBerry-toting bunch, here are 8 BlackBerry themes from the BlackBerry App World for cheering up that somber-looking display.

1. Newspaper Lite: MMMOOO has created this really interesting theme around newspapers, yellowing newspapers and the effect is charming. All the icons and information you’d normally find on the screen integrates within the newspaper layout to make it look like you’re actually flipping through one and there’s a customized default style icon set that’ll blend right into the design. 10 icons are accessible from the homescreen and users get the option to put their photo in the ‘Spot Light’. Newspaper Lite works with BlackBerry OS 4.6.0 or higher devices.

2. Touch Me Twice: It shouldn’t take you much time to figure out that Touch Me Twice is unlikely to gel with RIM phones which don’t offer touch capabilities. This one’s only meant for BlackBerry Torch 9800 owners with a penchant for minimalist interfaces. What users get is a plain old black hued homescreen with a large fingerprint taking up the center. There are two touch points on the display – the date area and the battery area. The bottom left corner can be prodded to launch the first icon on the app screen, while tapping the bottom right shoots out the second icon.

3. Minty Business: As if you needed your BlackBerry to appear any more professional. You did? The Minty Business theme claims to keep ‘it clean, informative and professional while supercharging your BlackBerry experience.’ It throws up unread e-mails and your default calendar appointments on the homescreen as well as preferred app icons. The Manage Connections and Clock apps sit on the right side of Profile and the default wallpaper is all black. It works with RIM smartphones sipping off BlackBerry OS 6 or later versions.

4. Anti-Love Valentines Day: Were you among those people who happened to be looking for dating sites to head for when your love-calls went unanswered on Valentine’s Day? So what if Cupid’s day is a few months away? You can still play the scorned and sulking lover with the Anti-Love Valentines Day theme. Requiring BlackBerry OS 5.0 or higher devices, V-Day haters who’d like to sport a bloodied rose on their homescreen can pick this one from our compilation of BlackBerry themes. Be wary, the versions of the theme vary with the phone type and none of them are for the faint-hearted.

5. The Birds: So an anti-love theme is not everyone’s cup of tea. How about The Birds, a design based on a pair of cute birds, the perfect picture of innocence and happiness? The multi-hued icons and sketches seem to show off a crayon-like texture and the shades are all soft and fuzzy, while the patterns play out in paper-cut style. There’s something about the vibrant and colorful images that just seem to lift the soul. It’s like leafing through a kid’s coloring book. MMMOOO is the proud presenter of the theme which rubs along nicely with anything running BlackBerry OS 4.5.0 or higher versions.

6. Explorer 2.0: We do get so used to our PCs, using our BlackBerry for business purposes begs us to readjust to the mobile experience sometimes. The Explorer 2.0 theme comes to the rescue with its interface that’s built to seem like you’re peeking at your desktop in miniature mode. Picture what happens on your PC screen when you hit the Start button and there you have it. It’s also accompanied by a bottom toolbar, pop-up menus and a reworked bevy of icons. BlackBerry OS 4.6.0 features under the required software for downloading this theme.

7. Azure and Pink: When you lend a name such as Azure and Pink to a layout theme, we’d pretty much take the hint for granted. More probable to catch the female eye owing to its color scheme, it sports animated notifications for calls and unread text messages. Hidden within it is a shortcut to a link which leads you to Premium and Free MMMOOO content. A LiLi set of icons is also mentioned among the specifics. Those wielding BlackBerry OS 4.2.0 or later smartphones should try this theme out if they adore pink or azure because it looks like the developers plan to charge for it later.

8. Roots of Spring: The full title is BlackBerry Exclusive Spring Theme – Roots of Spring. Who said the guys at RIM don’t have fun? The spring thesis also covers Spring Blossom as an alternative. In terms of aesthetics, it’s very basic in an artistic way. Additionally, users are extended the option of personalizing the homescreen, icons, menus and more. There’s nothing much too it apart from a little more color than the generic BlackBerry themes. Smartphones powered by BlackBerry OS 4.5.0 or higher versions are supported by it.

Still hooked to the themes which came with your BlackBerry device when you unboxed it? It’s time to try at least one from our list of free BlackBerry themes. Don’t be a bore, you don’t need a reason for everything.