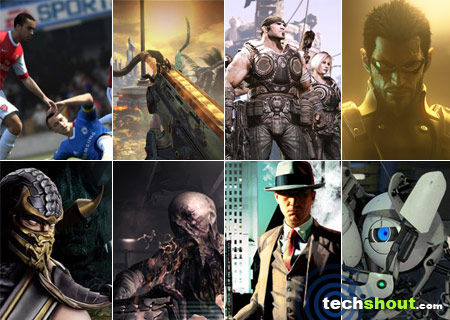 Before we enlighten you with our take on the best Xbox 360 games for 2011, let us all take a moment to eulogize and admire the developers who have made this list possible. Because, boy what a year it has been. If you’re an ardent gamer, you shall definitely agree with us when we say that 2011 was one of those year’s which has so much on offer that you are perplexed as to what to go for first. And mind you, the year isn’t over yet. Hordes of games including the likes of Batman: Arkham City and Forza Motorsport are warming up in developers’ stables and are sure to create a stir once they arrive. But till then here’s our log of the 8 Xbox 360 games 2011, that we’d like for you to enjoy on your consoles.

1. Gears of War 3 – Need we say more? Just the name is enough for every Xbox 360 owner to go ‘whoa’ every time it falls on their ears. Released just last month, it holds the capacity to keep almost any gamer busy for hours, non-stop. And if it’s facts that you desire, this game has been confirmed to have sold over 3 million units within just one week of its launch. Apart from the swashbuckling gameplay which the franchise is known for, the title also renders stereoscopic 3D visuals for those who own compatible 3DTVs.

2. L.A. Noire – This detective game was one of 2011’s most successful releases and undoubtedly so. Although it is set 1947, L.A. Noire’s gameplay has avant-garde written all over it. Apart from the fast-paced action sequences, car chases and gunfights, a novel idea that has been introduced through the game is that of interrogations. As a police officer, when you’re questioning suspects, you are required to actually judge them citing their body language and facial expressions. Besides that, the game can be identified for its design elements which have been inspired from film noir flicks of the 40s and 50s.

3. Portal 2 – The success of the earlier title is probably what has prompted developer Valve to come up with an even more superbly crafted first person puzzle platformer. It’s innovative, it’s exhilarating and it’s addictive in the real sense on the term. Basically, it’s everything you may want to spend your hard earned bucks on. The game’s spectacular writing, pacing and dark humor have made it a cultural icon of sorts.

4. Dead Space 2 – Fourth in our list of Xbox 360 games 2011, the survival horror third-person shooter is a worthy sequel to the much appreciated Dead Space. It has in store more thrills and chills than the earlier game, probably making it one of the scariest video games of all time. Whether it’s the long and endless battles or the challenging puzzles, this game never allows you to let your guard down. And its intense background score is sure to get your blood curdling one too many times.

5. Deus Ex: Human Revolution – This monster of a game was released back in August and since then it has been basking in the massive critical acclaim that is being showered on it. The protagonist Adam Jensen has undergone drastic surgeries that have fused his body with mechanical augmentations. He must now search and destroy the perpetrators of an attack which ruined the corporation he works for. If its futuristic looks don’t manage to leave you spellbound, its pillar style of gameplay without a doubt will.

6. Mortal Kombat – Let us get one thing straight, no Mortal Kombat game has ever looked so vicious, so fast-paced and so captivating than this one. The ninth edition to the incredibly popular series of fighting games has put immense emphasis on the online multiplayer feature. It is a must have for all gamers who have kept loving Mortal Kombat games right from the arcade days.

7. Bulletstorm – The February release was characterized by its unique and vivid game design. If you fancy killing your enemies in every which way possible, this is one game you can’t miss. Feats like midair kills, pushing foes into carnivorous plants and finishing them off after shooting them in the testicles are just some of the moves that are on offer through this game. And all this while using the first person perspective is one hell of an experience.

8. FIFA 12: We don’t know how EA manages to churn out a new FIFA game every year, but one thing we most definitely know is that the fans love them. This last game in our list of Xbox 360 games 2011 looks just like every other FIFA game, from the outside. But once you get going with it, you’ll be charmed by the magnificent visuals that lie in store for you. One advice, don’t bother picking up the PC version, because it is way different from its Xbox 360 cousin in terms of almost everything.

All these games in our rendition of best Xbox 360 games 2011 have played their level best to ensure that the Xbox 360 doesn’t lose its sheen owing to the immense competition in the console market. There are still a few months to go before the year ends and titles like Forza Motorsport 4, Batman: Arkham City, Assassin’s Creed: Revelations and more are yet to be released for the console. With all these big names gearing up for launch, we can only expect fireworks this holiday season.