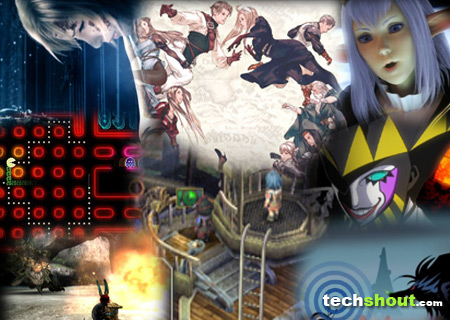 Sony’s plans to make sure your thumb gets enough exercise probably do not have the same noble intentions as Nintendo’s Wii Fit. But the PSP is a lot of fun, so we’ll be the last people to complain about that. We’ve lined up a few candidates in our list of 8 best PSP games 2011 just for the PSP-toting masses to ogle at.

1. (Parasite Eve) The 3rd Birthday – The third installment of Square Enix’s Parasite Eve series, The 3rd Birthday is an action RPG that could have you walking into walls and disrupting traffic as you pay no heed to the mortal world. Because Aya Brea is ready to save the virtual world from the Twisted. Brea is the only one with Overdrive abilities, meaning the power to transfer her soul from body to body. Go back into the past to change the course of the future while trying to get your head around all the twists and turns in the incredibly complicated plotline.

2. Tactics Ogre: Let Us Cling Together – The second addition to our list of PSP games roster is a classic strategy RPG, Tactics Ogre: Let Us Cling Together has been reimagined for the PSP. The events unfold on the Valerian Isles, Jewels of the Obero Sea, as gamers dive into tactical turn-based battles supported by interesting graphics and audio effects. Four new story scenarios are expected to be unlocked once the player completes the main game. These cover The Songstress, A True Knight, The Magnificent Twelve and The Search for Warren. There’s an enhanced battle engine to deliver more realistic battles and 3D maps too.

3. Persona 2: Innocent Sin – Persona 2 trails along two storylines, namely Innocent Sin and Eternal Punishment. However, only the former is listed for PSP users in the U.S. The RPG plays out in Samura City, Japan. Strange incidents have been happening around the city and it’s up to a bunch of high school students to investigate these happenings while battling their personal demons. The protagonist’s party members must master the power to summon an alternate side of themselves called Personas, contact enemy demons to gain items, tarot cards and other information.

4. Dissidia 012 (duodecim) Final Fantasy – An epic tale of conflicts between the higher orders, Dissidia 012 (duodecim) Final Fantasy is the prequel and remake of Dissidia: Final Fantasy. Bravery attacks and HP attacks form the pillars of combat in this game which requires players to determine the best way to use these attacks. But you already know that. In this PSP title, which is one of the best PSP games of 2011, the RPG-based character progression and equipment has been smoothened out by an Assist mechanic for summoning backup and launching offensives or defensive attacks against enemies.

6. Pac-Man Championship Edition – So you’re into some old-school gaming on your PSP. Namco Bandai Games is eager to serve with Pac-Man Championship Edition which is available in the PlayStation mini section of the portable console’s PS Store. It was originally created for 2007’s Pac-Man World Championship to celebrate the title’s 27th anniversary. The game is dotted with Pac-Dots, Power Pellets and four ghosts tossed across a variety of mazes to render some engaging arcade action. And all those ghost trains, bombs and slowdowns have apparently been done away with in this version.

7. Legend of Heroes: Trails in the Sky – Next on our list of recommended PSP games was first let out for the PC platform back in 2004, the Legend of Heroes: Trails in the Sky PSP spinoff has been reworked with a host of improvements. The developers say that you will be able to traverse this game world and club things to death and the dismembered body parts of your foes are good for cooking. If you have a strong stomach, that is. There is a bath scene too and you can go fishing. Several NPCs that you bump into will utter unexpected and offensive things. Do we need to sell it to you now?

8. Patapon 3 – Out as a UMD as well as PSN download, Patapon 3 follows after the battle at the end of Patapon 2. That was back when the masked Hero Patapon led an offensive against the Karmen forces. The mono-ocular warriors braved their way through courageously until they got to the most evil demon warrior of Patapolis. There’s more to the story, with a lone Hatapon, the flag bearer as the only one standing who hasn’t been turned to stone. You must play the part of the Mighty One and fuse your essence with a fallen soldier to bring to life the Uberhero Patapon. It’s up to you now.

What have you been playing on your PSP lately? Tell us if we’ve forgotten about any interesting games in this list of the best PSP games.