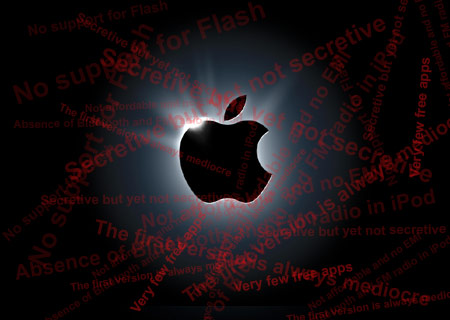 Although Apple has given us umpteen reasons to love its fancy iOS devices, there seems some discontentment among its users. The company’s commendable success with the set of glitterati devices and brand loyalty is known to all. However, it has managed to receive flak for quite a few reasons. Yes, people would love to see Apple change a few attributes. Here, we throw light on the woes with the top 7 reasons why people hate Apple iOS devices.

It’s some time now that we’ve been yenning for a USB port embedded in Apple device. Much to our chagrin, it hasn’t happened even though USB support appears to be a common attribute these days. It’s time Steve Jobs takes this addition seriously. And, we are sure just like us, you won’t find too many fans of iTunes.

We know Apple has its reasons to not employ Flash in the iPod, iPhone and iPad, which Steve Jobs skillfully penned down in a letter last year. So, it’s clear that Apple will not support Flash over HTML5 which it believes to be the future of web. Well, whether HTML5 is the ‘future’ or not, the company’s ‘present’ consumers aren’t necessarily singing to a similar tune.

An Apple device with a lower price tag attached to it. Well, this could be a request from many. Moreover, some easy monthly payment options could further add to the convenience. Moreover, lowering the price of a device only after its successor makes its presence felt is also irksome.

Apple has a peculiar way of putting forth its devices. The company’s plans of a tablet in pipeline had made several rounds of rumors which began almost a year before its release. On the other hand, its latest series of iPods just emerged unalarmed. Yes, except for the iPod Touch that hogged some limelight way before its release, owing to the built-in camera.

5 – FM Radio and Bluetooth in iPods:

Although some latest versions do support the FM functionality while Bluetooth connectivity is accepted with wide arms by the iPod Touch, we couldn’t miss on this being one of the reasons of dissatisfaction for Apple users. After all, who wouldn’t love one of the traditional medium of music and a Bluetooth headset to gel in well with dainty Apple devices.

‘Free’ is a word cherished by the consumer community. We are sure, most of us agree on this one. Knowing that Apple is being inundated with newer apps or rather the App Store has been over-flowing lately, one would not come across too many interesting games as well as other apps available for free.

Those Apple loyalists who aren’t convinced with the above mentioned nuggets would definitely agree on this on. Apple is known to craft a device with its updated successor following soon enough. This has irked many around the world and its time Apple put in all their energies into producing a couple of all-inclusive feature-packed devices rather than leave out certain basic factors only to come out with newer versions. In fact, till a particular device reaches select countries, the successor is already popping its head elsewhere and the former loses its fizz.

If some may agree, these are a few reasons why one could be miffed with Apple iOS devices. It’s time the company pays some heed here before it slips off from the position of being the ‘apple’ of the world’s eyes.