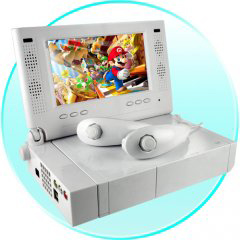 ChinaVasion has launched an innovative product named the 7-inch Nintendo Wii LCD Monitor. You can attach the screen on the back side of the Wii console.

The screen is equipped with a ball and socket hinge so it can be turned appropriately whenever you want to use it. On the other hand when the screen is not in use, it can be folded down against the Wii.

The screen is further powered by a normal Wii power cable or by the included cigarette lighter adapter.

Moreover the screen features a reverse/up/down picture control to fix the picture.

The good news is that the screen can also be plugged into other devices such as a DVD or other media players with the extra AV outputs.

The Nintendo Wii LCD Monitor is now available at Chinavasion.com for $101.45.