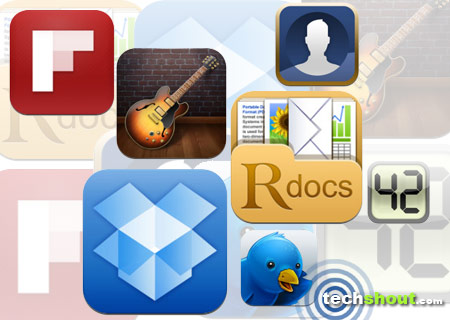 Here we have listed the best iPad 2 apps of 2011, why you ask? Well the Apple tablet which seems to be ruling the roost and giving most tablets in tech world a run for their money has inspired developers to cash in on its success and create apps to augment its productivity even further. So we have listed below a list of the choicest apps for your beloved tablet. Scroll down to find out more about the ones that made it to our iPad 2 apps 2011 roster.

Freedom from USB flash drives and worries about enough storage space on your iPad 2 is what the Dropbox app promises to give you. This free service lets you carry digital content wherever you go without the need to tag along additional devices. Files, email attachments, videos and more stored to the Dropbox app are automatically saved on the iPad as well as the Dropbox website. This feature of the app ensures that you always have access to your data regardless of where you are. It also allows you to save data under the ‘Favorites’ option for instant offline access.

The Twitterrific for Twitter app should make sure that you are always updated with the latest happenings on the micro-blogging website. This addition to our iPad 2 apps 2011 roster is quite easy-to-use and comes with a user-friendly interface which boasts of some elegant features. It not only makes reading and composing tweets simple, but also allows filtering message types and launching searches on the Twitter website. It includes actions like link shortening, re-tweeting, tweet translation and more. And that’s not all, this free for all app also lets you manage multiple Twitter accounts.

Instead of waiting for the SNS giant to launch the optimized app for your slate, go for the Friendly for Facebook app. Though not designed by the social networking website, it offers the Facebook experience. Be it chatting with Facebook friends, browsing through their albums or uploading your pictures, this app offers a lot of interesting features. Displaying no advertisements at all, the application takes care of your privacy with the aid of a PIN code. Besides allowing users to switch between multiple Facebook accounts, the latest version of the app also comes with profile picture editor, photo effects and filters.

The next to feature on our list of iPad 2 apps 2011 is ReaddleDocs. This all-in-one document viewer and file manager application is what you need to view and edit documents on the iPad 2. ReaddleDocs is a multitasking business app which is capable of supporting large pdf files, Apple iWork files as well as Office documents. It provides access to documents from various sources ranging from iDisk, Dropbox, email attachments, Windows and Mac systems and more. And it also offers instant access to documents as you can save files in Readdle storage in a similar manner as the Dropbox app.

Music composers will particularly love this app the best as it serves as their personal studio for on-the-go recordings. Featuring several musical instruments, this app recreates the acoustic experience rendered by piano, guitar, organs, drums and more through multitouch gestures. Regardless of whether you play instruments or not, the Smart Instruments attribute promises to help reproduce audio pelasingly. And if you wish to record a song, the built-in microphone will assist you. Also, it lets you mix up to eight tracks to aid in composing a single song out of them. Additionally, the app allows sharing the composed song through emails or adding it to the iTunes library on the system.

Next addition to our iPad 2 apps 2011 compilation is the PCalc Lite app which makes up for the lack of a calculator in the Apple tablet. The scientific calculator is capable of carrying out a number of calculations. Featuring an optional RPN mode, multiple undo and redo the calculator can also be used for unit conversions. This application comes with an added selling points of a stylish design and themes to choose from. A free as well as a full version of the app is available through the Apple App Store. 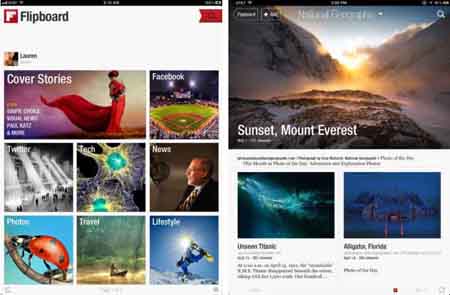 There’s not much you can do if you are bored of surfing through the same old social media accounts. Well, not unless you are the proud owner of the Apple iPad. The Flipboard app for the tablet displays content from Facebook, Twitter, Google Reader, Flicker and Instagram in a magazine layout. It not only ensures these updates are easy to scan, but it also makes it fun to browse through what your friends are up to. And apart from social networking websites, the app supports a number of publications such as the National Geographic, The New Yorker, Rolling Stone and many more. And to add to it, the app can be customized with different sections.

So here we draw the curtain on our list of the best iPad 2 apps 2011. Do let us know which of these apps you plan to download for your Apple slate.