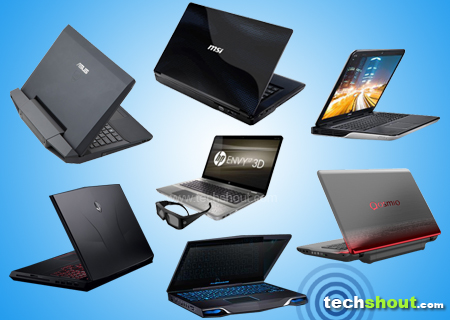 Here we have compiled our list of the best gaming laptops of 2011 for avid gamers. to use when you are traveling. As portability acquires new dimensions, gaming has certainly not been left behind and the inflow of laptops especially designed for hardcore gamers will vouch for it. These laptops cram in attributes which are a pre-requisite for any gaming device and for all you gamers out there we have jotted down 7 such gaming laptops. Take a look.

This 3D laptop promises hyper-realistic graphics rendered by the Nvidia graphics which can be optioned by an AMD processor. Adorning a 17-inch full HD display of resolution 1080p, the laptop can be connected to an external 3D HDTV. It packs in the Intel Core i7 processor in addition to 16GB of 1333MHz RAM. And if that’s not enough, Intel Turbo Boost 2.0 technology will leave no stone unturned to deliver swifter performance. The gaming will not be interrupted when you are on the go as the notebook boasts of a long battery life. The price tag attached to this gaming laptop reads $1499.

When it comes to 3D functionalities, the Asus G53SX could come across as a tough competitor for most gaming laptops. Featuring Nvidia 3D vision, you can opt for the variant offering glasses-free Naked-Eye 3D technology. And its performance is not restricted to visuals, the 15-inch machine employs EAX and THX surround audio which transmit enveloping sound for the perfect gaming experience. Fuelled by the second generation Intel Core i5 or i7, it offers faster response. Also, the Microsoft DirectX 11 further enhances its graphics. The price of this gaming laptop starts at $1,179.

It is not at all surprising to find another Alienware in the list as it has managed to create its own space in the gaming world. Boasting of a killer combination of Intel Core processor and the display of resolution 1600 x 900, the laptop is capable enough to be the object of envy for many. Adorned with a unique design, the laptop weighs less than 3.2kg. The specs list looks pretty impressive as it features second generation i7 processor with Turbo Boost 2.0 technology, up to 8GB 1600MHz DDR3 SDRAM in addition to Nvidia Optimus Dynamic graphics technology. Featuring a customizable touchpad, it comes with the AlienFX lighting controls. The pricing begins at Rs. 86,900.

Next on our list of gaming laptops 2011 is the HP Envy 17 3D fitted with a 17.3-inch display offering crystal-clear viewing. Operating on Genuine Windows 7 Home Premium 64-bit, its second generation Intel Core i5 processor with Turbo Boost technology can be optioned with quad-core i7. Supporting Intel wireless display and DirectX 11, the gaming machine employs Radeon HD 6850M graphics and 1GB GDDR5 memory in addition to 6GB DDR3 RAM. Also, the machine is fitted with an island-style, backlit keyboard which sports an oversized clickpad. The price of this HP machine starts at $1,599.99.

Promising elite performance, this laptop claims to be meant for those who insist on having the greatest. Similar to most other portable gaming computers featuring on this list, the Qosmio too crams in the second generation Intel dual-core or quad-core processor. And as a gaming laptop is incomplete without its graphics, this notebook packs in Nvidia GeForce GTX 560M processor, 1.5GB DDR5 graphics memory and Nvidia Optimus technology. Besides high-definition visuals, it delivers 3D performance with the aid of Nvidia 3D Vision technology. And besides the stereoscopic 3D viewing, it is also equipped with a 3D webcam. It can be yours for a starting price of $1,199.99.

As 3D is the new ‘in’ thing in the gaming world, we present to you another laptop that offers 3 dimensional entertainment. Capable of supporting up to 2.7GHz Intel Core i7 processor and 8MB cache, it operates on the Windows 7 OS. Employing the Intel HM67 Express chipset, it can be deployed with up to 12GB RAM DDR3. The gaming device with a 17.3-inch Crystal LED display of resolution 1920 x 1080, comes with built-in Nvidia TT550M graphics card. It can also be integrated with a 256GB SATA hard drive to 1280GB hard drive. The Dell XPS 17 starts at $899.99.

So if you are a hardcore gamer, we are sure our list of the best gaming laptops 2011 must have tempted you into laying your hands on one of these monsters. Needless to say, companies are spending sleepless nights over creating something even better. And we promise to be back with another list soon. Watch this space for more.