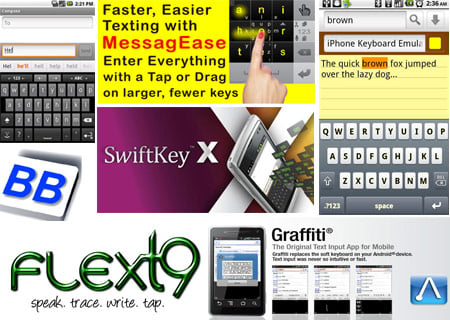 Who says you have to put up with your Android device keypad if you are not particularly its fan, just head to the Android Market and trade it for a better keyboard app. Unlike other operating systems, Android understands the importance of a comfortable keyboard and we have listed the 7 best Android Keyboard Apps for you. Have a look and say goodbye to your typing woes forever.

The AnySoftKeyboard app proves could be useful for multi-lingual users to send messages in their native lingo. The app offers an on-screen keyboard with multi-language support which can be customized to suit your typing. In addition to dictionaries in all available languages, the keyboard completes words as well as names saved on your phonebook. Also, the multitouch keyboard supports a number of gestures to execute different functions when swiped in different directions.

We have an option for users with chubby fingers annoyed with the tiny buttons embedded on their Android devices. The Big Buttons keyboard Deluxe sports keys twice as large compared to regular Android devices and offers QWERTY, AZERTY and QWERTZ layout for better flexibility. It adds to the comfort factor with big buttons for punctuations and numbers as well, thereby allowing faster typing. Its features are inclusive of prediction, error correction and adjustable click volume or vibration feedback. And if you operate with Android platform 2.2 or above, the keyboard supports voice-to-speech function with the aid of a microphone.

The FlexT9 keyboard is a truly multitasking app with an interface that supports four different types of input methods. The app is meant for select devices running on Android 2.1 or above. You can speak, trace, write or tap on the keyboard to type in a message. It understands voice commands as well as glide gestures wherein all you have to do is trace your finger from one letter to the other. The third input option is the simplest where you can write the word using your fingers. And needless to say you can type on it as you would do on a conventional keyboard.

Available in English and Japanese, the Graffiti for keyboard Android app replaces the default keyboard of your smartphone. It employs the stroke based handwriting recognition system utilized in Palm PDAs operating on PalmOS. It makes for a faster and accurate typing method as you directly write the scribble the text. It also includes functions like Auto-capitalization to speed up the process even further in addition to Word learning. An interesting feature is that you need not type the letter accurately for the keyboard to recognize it but something that looks similar. Also, there are separate areas for text and numeric inputs which interpret only numbers or letters when typed in the designated areas. And its help screen will assist you if you are not familiar with the Graffiti alphabets.

Though not many devices boast of the Honeycomb platform, this app is best suited for few which employ this latest version. The iPhone Keyboard Emulator app will help you experience the user interface of the iPhone on your Android smartphones. This keyboard is only available in English and comes in two versions. The paid version comes with an option of word completion whereas the free one lacks this feature.

The next to feature on our list of 7 best Android keyboard apps is the MessageEase which offers a keyboard unlike most conventional keyboards. The keypad only features nine buttons with the most used characters placed in the center of each button. All other letters too, are present on these buttons surrounding the central letter. And typing is extremely easy as you need to tap for inserting the most used letters and glide through buttons for not so frequent ones. Also, you can adjust the size of this keyboard by simple swipe gestures. And what’s more, it is available in a number of different languages and colors.

One of the most popular Android keyboard apps, the Swiftkey app not only completes the word you are typing but also predicts what the next word should be. The app allows full personalization of data from Facebook, Gmail, Twitter or SMS. Besides prediction, it also features error correction to avoid typos and comes with three high definition themes namely, light, dark and neon. Also, a dedicated button displays the numeric keyboard while the same button takes you back to the QWERTY keypad. Like most other keyboards, it supports multiple languages with an added advantage to enable three languages simultaneously.

So we believe our list of the 7 best Android keyboard apps gives you enough reasons to change your default keyboard to a fancier one and make typing even more simple and fun. So which of these do you plan to download for your Android device?