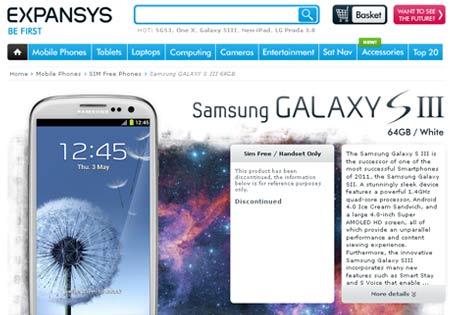 A couple of reports going about indicated that online retailer Expansys stopped accepting pre-orders for the 64GB Samsung Galaxy S3 smartphone claiming that the device has been discontinued. But Samsung was quick to rectify the problem by issuing a statement which points out the handset in question is still in the works and will soon make its debut.

The 64GB variant was announced by the company when the smartphone first made its appearance back in May 2012. Slated as coming soon, little has been heard about this particular variant over the course of time, that’s until now. The guys over at The Verge appear to have got an official word on the matter. Samsung stated that ‘The 64GB model of the Galaxy S3 will be available during the second half of this year. The market availability and timing may vary and will be determined at the time of release.’

Despite the official verdict, the Expansys Galaxy S3 page still denotes that the ‘product has been discontinued.’ For refresher’s sake, the handset is amongst the few smartphones that pack in a microSD card supporting up to of 64GB of memory, bringing the overall total hoarding capacity to 128GB (internal + external). Additionally, the variant making news is the global version equipped with a 32nm ARM Cortex A9 Exynos 4212 Quad chipset and 1GB of RAM.

Just so that all doubts are cleared, the 64GB Samsung Galaxy S3 launch is still happening and it’s expected to be available during the second half of this year, as stated earlier. The exact price and release date details are still under wraps.