6 Games for Windows Titles announced in India by Microsoft 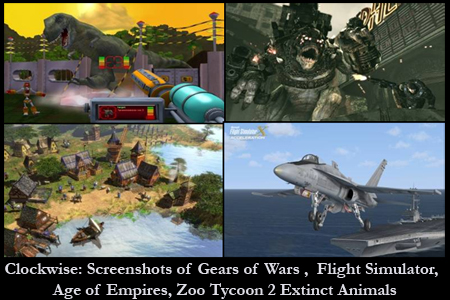 At the beginning of the year, everyone was waiting for this time of the year because a whole lot of games were scheduled to launch ahead of the festive season. Finally, the time has come and this is certainly a peak time for console owners and PC gamers alike. Microsoft has announced the availability of six new games on the Games for Windows platform in India.

From the popular strategy Age of Empires series comes the ‘Age pf Empires III: The Asian Dynasties’, which will take gamers back to Indian in 1857 to fight the East Indian Company as did the soldiers during the 1857 revolt.

The Age of Empires III Gold Edition for PC is also available in India as of now.

Also available in the award-winning Zoo Tycoon 2 Extinct Animals Expansion Pack that lets gamers bring animals that once roamed the Earth during the Ice Age back to life.

Then, there’s Flight Simulator X Expansion Pack which will enable globe trotters to cruse over 24,000 airports and experience what its like to be an aviator traveling the globe.

For the young one’s, there’s Viva Piñata which is a whacky comedy series that can be the perfect party game.

Saving the best for last, is the much-awaited Gears of War PC version. We got to check out this game at Microsoft’s recently held Gamers’ Night event in Mumbai. So, all you PC gamers will not have to wait any longer to get your hands on this much-talked about title that was only available on the Xbox 360 console until now.

All of the above mentioned Games for Windows titles will be available from tomorrow, the 27th of November onwards in India.