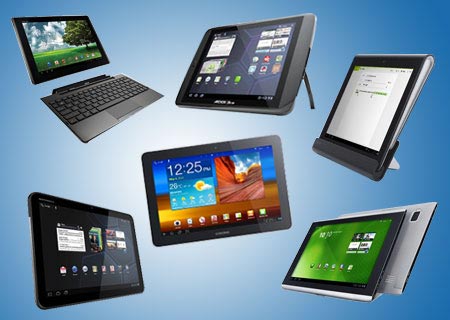 We can assure you that the iPad 2 will not find its way into our 6 best Android tablets of 2011 list. Really, Apple products just attract an indecent amount of attention and not everyone is necessarily mad about the tablet anyway. It’s also not the most comfortable slate to hang on to unless you find a suitable surface for plopping it down. And then there’s the unavoidable fact that it runs iOS and not Android, which means it didn’t have a chance on this list in the first place.

1. Samsung Galaxy Tab 10.1: It’s time to Tab with the Samsung Galaxy Tab 10.1 (not 8.9) which costs upwards from $499.99. The company may have been placing its bets on the 7” version initially, because those were times of uncertainty. It was when no one was sure whether they wanted a large Android phone or a netbook without the keyboard from a slate. Well, they could have taken a cue from the iPad and just given us the Galaxy Tab 10.1. At any rate, we’re not complaining considering its 1,280 x 800p WXGA display, Honeycomb 3.1-readiness, 1GHz dual core Tegra 2 processor, 8MP rear camera and more.

2. Motorola Xoom: The second in our Android tablets roster is the Motorola Xoom which comes powered by a 1GHz dual core Nvidia Tegra 2 chip and Honeycomb 3.1. A 10.1” 1280 x 800p WXGA touchscreen display stretches across the front and there’s 3G, Wi-Fi and 4G connectivity. The tablet renders around 10 hours of browsing over Wi-Fi and embeds a 5MP rear snapper with 720p recording capabilities as well as a 2MP webcam on the bezel. It can be ordered from the Motorola website starting at $499 for the plain Wi-Fi flavor.

3. Asus Eee Pad Transformer: Depending on whether you’re shopping for the 16GB or 32GB Asus Eee Pad Transformer on Amazon, you’ll be shelling out approximately $394 or $469, for the respective variants. A 1GHz Nvidia Tegra 2 processor supplies all the steam for multi-tasking and HD video playback. The screen happens to be a 10.1” LED backlit WXGA one with 10-finger multi-touch accommodation. We need hardly mention that it works with Honeycomb, Android 3.2 in this case, and provides Adobe Flash 10.2 support.

4. Acer Iconia Tab A500: For those who’re totally into sleek aluminum back panels, the Acer Iconia Tab A500 has just this to proffer. It flaunts a 10.1” 1280 x 800p multi-touch screen and dual core Nvidia Tegra 2 CPU as also HD-optimized graphics from the Nvidia GeForce GPU with Flash 10.2 support. Among the many terminals decorating its edges is a microUSB 2.0 port, a USB 2.0 port and a micro HDMI out. Priced below $400 on Amazon, the tablet runs Honeycomb 3.0 and integrates a pair of cameras, one with a 5MP sensor and the other with a 2MP sensor.

5. Archos 80 G9: Because it takes all kinds to make a list of Android tablets feel complete, the Archos 80 G9 is here for everyone who wants to hook up this slate to the web through a microUSB port. The $299.99 device won’t cajole you into choosing between 3G or Wi-Fi since Archos has developed a separately purchasable 3G dongle for their G9s. On the spec front, it sports Android 3.2, a 1GHz ARM Cortex A9 dual core processor, a 720p front facing webcam, 8GB storage (definitely on the lighter side) and an 8” 1,024 x 768p resolution capacitive touchscreen.

6. Sony Tablet S: Sporting a rather unusual form factor for a slate, the Sony Tablet S is on our list of recommended Android tablets owing mainly to its appearance. You may want to tread cautiously around the idea of a touchscreen device without Gorilla Glass, but it’s got its highs too. These involve a 1.2GHz Nvidia Tegra 2 dual core processor, Honeycomb, a 9.4” LED backlit TruBlack Display, DLNA, Wi-Fi and PlayStation certification for $499.99, if you pick up the 16GB version and $599.99 for the 32GB model. A 3G version is said to be in the pipeline too.

We may also a spare a mention for the Notion Ink Android tablet which spent a lot of time shuffling around launch delays. Here we go – Notion Ink Adam. If you point to any interesting launches we’ve left out of this list of the best Android tablets 2011, we’ll pay attention to that nagging feeling about having missed out something next time around.