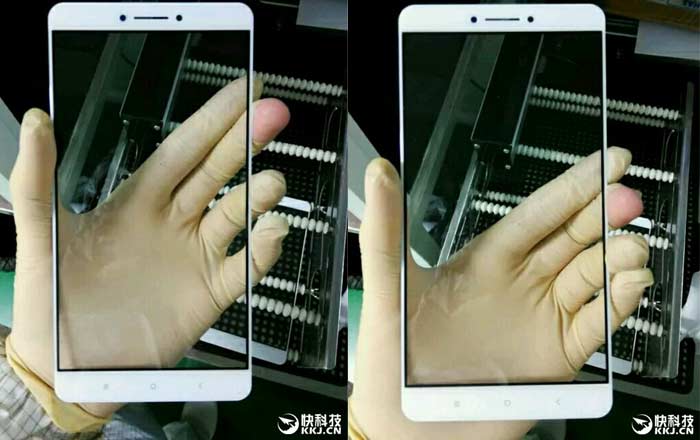 Xiaomi recently ran a poll asking its fans what its next phone should be called and gave them the options of Xiaomi Pro, Plus, Big and Max. A majority picked the last one, officially making that the name for the upcoming handset.

Going by its moniker, the Xiaomi Max will probably be a phablet. A new set of photos which have been leaked online seem to confirm this belief, although there’s no way to make sure it is indeed the same phone. It certainly looks like a smartphone out of the brand’s stable given its look and design language.

The images were first posted online via Chinese micro-blogging site Baidu and picked up by My Drivers. The pictures appear to be factory images showing off the massive front panel of the Max, which some allege measures 6.4-inch in terms of size. 2 holes for the selfie camera and proximity light sensor can be spotted flanking a speaker grille.

There are also 3 capacitive buttons on the bottom. This means the future Xiaomi phone won’t be sporting a physical home button like the Mi 5. Speculation so far has hinted that the new device will support fingerprint scanning. If accurate, the sensor might make an appearance on the back of the handset like the Redmi Note 3 or may even be integrated within the display itself.

Keep in mind that we’re still at the rumor stage of the Xiaomi Max and all this information should be taken with a pinch of salt. Sources say the smartphone may come out in May this year. We’ll let you know if anything major about it pops up until its official debut.