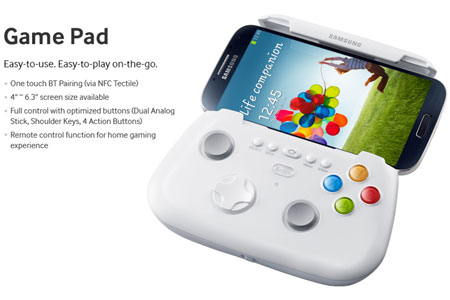 A 6.3-inch Samsung Galaxy Note 3 could be in the works, according to what has been spotted among the coyly listed out features of an accessory for the S4. The Game Pad is supposed to account for better control and a more traditional feel when playing games on the go, but it also may have unwittingly outed the screen size of the next S Pen device.

The key ‘leak’ here is that the Galaxy Note 3 might have a 6.3-inch display. Oddly enough, this comes directly from the South Korean manufacturer’s accessory section for the S4. On the tab for the Game Pad, it is listed that the accessory is compatible with screen sizes ranging from 4 inches to 6.3 inches, and this is primary aspect fueling speculation.

And as website Trusted Reviews is reporting, what is interesting is that the company does have a few 4-inch smartphones including the original Galaxy S, but has nothing so far that can slot into the higher end of the screen size listing. What’s even more intriguing is the following: this could mean that some (if not all or many) of the S4’s software features will be compatible with older devices.

Here’s a little background on the rumors surrounding the next Note device. Earlier this month there was talk that it would come with a marginally larger 5.9-inch AMOLED screen than its predecessor. That bit of gossip also guessed the device would come with an 8-core processor. Then, a little later, it was thought the phablet might do away with an AMOLED display and instead settle for an LCD screen, on account of the fact that the Korean smartphone maker had purchased a small stake in Sharp, amounting to a capital input of about 10.4 billion yen.

It could very well be that the Samsung Galaxy Note 3 has already settled on a 6.3-inch display. And with the innumerable rumors and leaks that we’ve seen already originating from all over the Internet, this one seems to come from the unlikeliest of sources; the manufacturer itself. Whether this one actually blooms into something real or fizzles out will have to be seen, but with no clear picture of a launch date at present, all we can do is wait for official confirmation.