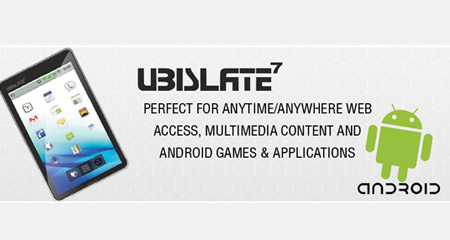 We never guessed we’d bump into an upgraded version of the Aakash tablet calling itself the UbiSlate 7+ while combing the web for some of the cheapest slates. But Datawind has apparently got wind of the idea that low cost slabs are in high demand and upping the price by some ten greenbacks or so doesn’t mean they won’t sell.

The Aakash tablet which was being vended as an inexpensive version for students, has been showing a ‘Sold out’ on the website for some time now. But interested parties are being offered the alternative of pre-booking its commercial UbiSlate counterpart anyway and it’s not just the price that’s climbed higher.

While the original Wi-Fi capable device sipped off Android 2.2 or Froyo, its successor snacks off Gingerbread 2.3. The new tablet adds GPRS connectivity to deliver SIM and phone functionality, apart from using a 3200mAh battery over the older variant’s 2100mAh one. 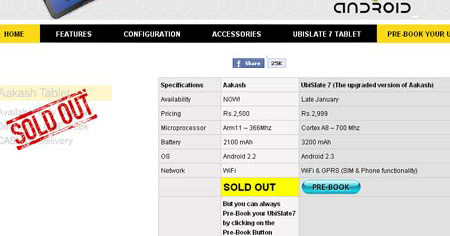 CEO of Datawind, Suneet Singh Tuli, remarked, “This is a made-in-India product. Thank you for giving me the opportunity to do this. The final goal is to either provide the same features at a lower cost or provide better functionality and features at the same cost.”

Powered by a 700MHz processor, Datawind says that their tablet should be able to go on for around 5 hours before crying to be juiced up again. It integrates a 7-inch 800 x 480p resolution display, a couple of USB 2.0 ports, 2GB internal storage, 256MB RAM and the ability to expand the hoarding space by up to 32GB.

The UbiSlate 7+ tablet is slated to reach India sometime in late January, that’s next month. The asking price is Rs. 2,999 and it can be pre-ordered from Ubislate.com.