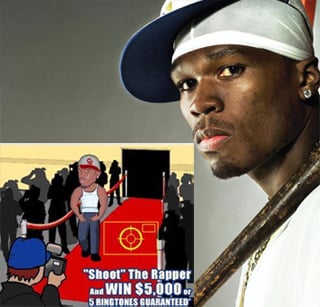 Renowned American hip hop artist 50 Cent has dragged an internet advertising company to court for having illegally using his image in a game where the players pretends to shoot him. 50 Cent has sued the company for a humongous $1 million.

The game, titled “Shoot the Rapper,” shows 50 Cent walking back and forth in an ad across the top of a webpage while the viewer is asked to shoot him by aiming and clicking with the mouse, court papers say.

When the viewer aims correctly and hits a successful shot, a misty cloud of red appears, after which the viewer is directed to another webpage where the ad firm’s client sells goods and services, stated the lawsuit. The message in the ad reads: “Shoot the Rapper and you will WIN $5,000 or 5 RINGTONES GUARANTEED.”

According to 50 Cent’s lawyer, Peter Raymond, though the game doesn’t use 50 Cent’s name, all the same “it looks like him, and there’s no doubt the character is intended to be him.”

The lawsuit names Traffix Inc. of Pearl River, N.Y., as the defendant. A lawyer for the company, Ezio Scaldaferri, said that since he had not been served with the papers, he was not in a position to comment.

Speaking about the issue further, Raymond said that the advertising company is using 50 Cent’s resemblance without his permission and suggesting that he endorses the game.

“For all those reasons, he is personally offended,” the lawyer said.

Apparently 50 Cent got to know about the ad after one of his management people saw it on a MySpace page.

Now the rapper’s lawsuit seeks a minimum of $1 million in actual damages, a permanent injunction against the use of his image without permission, and unspecified punitive damages.