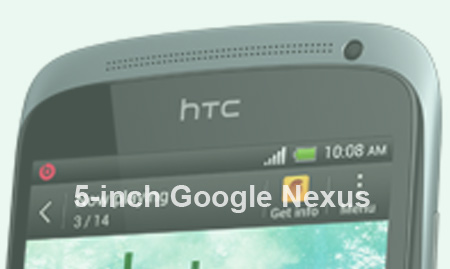 Rumor has it that a 5-inch HTC Google Nexus 5 smartphone is on the cards. What’s even more interesting is that it’s claimed to be just one out of a batch of Nexus devices Mountain View will release this year.

According to the buzz, Google may have plans to introduce no less than 5 new devices and market them under the aforementioned series. HTC has done it before with the Nexus One and there’s little reason as to why the Taiwanese manufacturer couldn’t partner with the company again. This juicy tidbit comes from GSMArena who cites an ‘anonymous tipster’ as the source of the news.

Apparently, the Droid Incredible X or the One X 5 is the device being talked about. But connecting this handset which remains the stuff of gossip to the 5-inch Google-HTC phone may not be the best bet. At any rate, the impending smartphone is speculated to run on Android 4.1.2. The mobile OS version is said to tow along Project Butter enhancements, bug fixes, additional lockscreen functionality and more.

In terms of hardware, the new Nexus is expected to sport a 5-inch 1080p touchscreen and 64GB onboard memory. A Snapdragon S4 Pro processor is touted to be hidden within its core and a 2500mAh battery could supply the juice. Before seasoning the entire story with a pinch of salt, add in a 12MP rear camera and a 2MP front one too.

Well, Samsung has certainly made the phablet popular. Let’s hope we hear more on the 5-inch HTC Google Nexus 5 release before the weekend’s here.