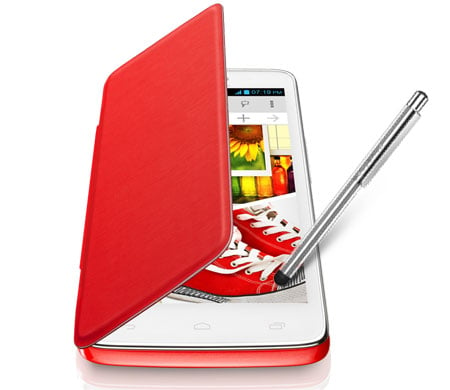 Taking on the Note 2 is the Alcatel One Touch Scribe Easy Android phone which debuted at the MWC recently with a 5-inch non-HD screen and a dual core chipset. Splashed in vibrant colors such as flash red, fresh blue and flash yellow, this new smartphone from the company succeeds its HD predecessor which we had spotted at the CES last month. Although both come with a same-sized display, their other specifications are quite different from each other.

The One Touch Scribe Easy comes equipped with a dedicated touch pen that is aimed by its maker at those who like to indulge in on the go designing activities. Handwriting recognition being one of its main attributes, this pen is of course able to lodge itself inside a slot made within the body of the device. As can be seen in the image above, a cover also forms part of this handset’s offerings. Dubbed the MagicFlip cover, it features magnetic traits, and also offers overall protection for the screen. 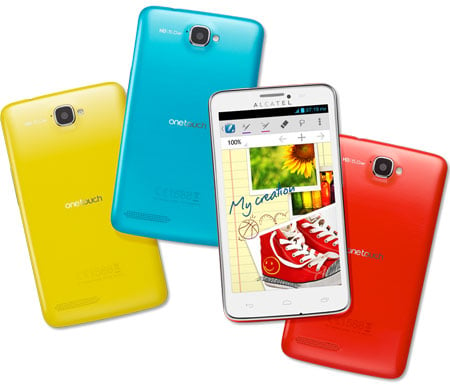 Coming to the device itself, it can be noted that its front is highlighted by a huge 5-inch WVGA display which throws it right into the phablet category. This capacitive touchscreen has been furnished with oleophobic coating. Just above it rests a VGA camera for video calling purposes, while the phone’s image-clicking and video-recording duties are thrust onto its rear-facing 5MP snapper. This autofocus camera comes with an LED flash, and possesses the ability to capture videos at 720p.

Google Android 4.1 Jelly Bean OS makes its presence felt on this one, while its operations are handled by a 1.2GHz dual core processor that is backed by 512MB of RAM. The company has earmarked 4GB worth of internal memory for users to hoard their content in, but those wishing for more will be able to utilize its microSD card slot. This splash-proof device also exhibits connectivity options such as Wi-Fi, hotspot, USB, Bluetooth 4.0, GPS with A-GPS and One Touch Media Share. 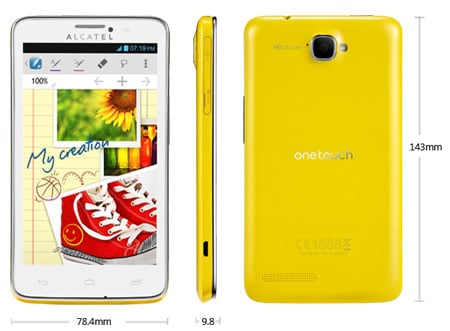 Even though all its main details have been splashed out, the price and release date information of the Alcatel One Touch Scribe Easy still remains unrevealed.