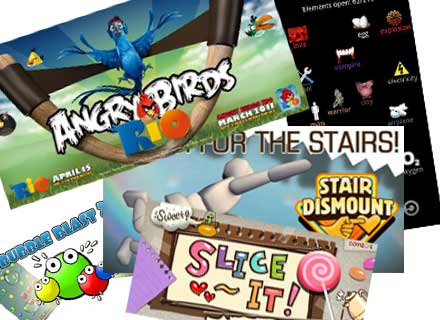 For all those who are still stuck up with slinging quirky-looking birds at mean green pigs here’s a quick lowdown on the 5 best free Android games 2011 which would give old Angry Birds a run for its money (Figuratively that is, as all these games are free of cost). Just to make you aware, the aforementioned game shall not be a part of this countdown for the obvious reason that it’s become almost synonymous with all the smartphones today. But its Rio counterpart will however be included in the list. So, without much ado, let’s get going with our catalog of the five free Android games 2011.

1 – Angry Birds Rio: With all the merchandise and everything, the birds are currently enjoying a celebrity status that could put even Brangelina to shame. A third edition to the incredibly popular Angry Birds series, this game perfectly incorporates elements from this year’s cartoon flick titled Rio. If you’re of the opinion that games based on films are nothing but money grabbing modus operandi, then you may be right, but that’s not the case with Angry Birds Rio. This game packs in a decent amount of fun with even more complicated puzzles and then there are the updates which keep releasing form time to time. This reminds us, another update is lined up for release this month.

2 – Alchemy: Ever dreamt of becoming one of those crazy scientists who accidentally invent something which has the whole world drooling over it. This game lets you do that and more. By dragging simple icons on one another, users can create over 300 elements. And these combinations get a little too hilarious sometimes. For instance, guess what you obtain on combining a vampire with a werewolf. The Twilight saga! Well more such quirky recipes lie in store for you in Alchemy. This uncomplicated free game certainly deserves a play on your Android devices.

3 – Stair Dismount: Physics based games are always fun. And so is Stair Dismount. It requires you to beat the hell out of a rag-doll named Mr. Dismount. Quite an optimistic name to have, shall we say! Anyways, your job is to push Mr. Dismount down the stairs and points are earned in accordance to the damage suffered by the poor little ragdoll. What’s more, you can paste on Mr. Dismount’s face, photos of anyone you’d want to see getting smacked all over the place. So be it your boss or your professor or your crazy ex, the choice is yours.

4 – Slice it!: As its description on the Android Market goes, this game ‘is all about slicing shapes into pieces that are equal in size.’ And that’s pretty much it. All you do is cut things in uniform sizes. But once you get going, it’s probably one of the most addictive games. So, here’s a fun way to learn your geometry without having to stay awake during dreary lectures. The game makes use of the multi-touch function of Android devices while requiring you to wield out both your fingers to cut various shapes.

5 – Bubble Blast 2: This last addition to our free Android games 2011 roster is a peculiar puzzle game which involves bursting bubbles to trigger chain reactions that lead to even more bubbles being burst. The key is to eliminate all the bubbles on the screen in the least number of turns. You can get really engaged to it once you get on a roll. Two game modes are on offer and there’s a variety of these cute little bubbles, all with their own resistance levels.

Other games which didn’t make it to the compilation but still deserve honorable mentions include Paradise Island, Yoo Ninja, Moon Chaser, Air Control and Paper Toss. The above listed best free Android games 2011 are sure to keep you immersed in your smartphones for hours. Give them a try and get back to us through the comment box down below.