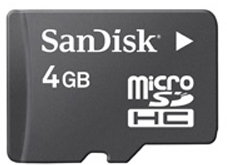 In fact, SanDisk made this announcement at the 3GSM World Congress 2007, where the company is demonstrating its products.

According to Jeff Kost, vice president and general manager of the Mobile Consumer Solutions division at SanDisk., “Content is driving the demand for higher capacity flash memory cards in mobile phones. The new 4GB SanDisk microSDHC card will allow handset manufacturers and mobile network operators to plan rich media services for their customers who increasingly see their phone as their camera, video player, gaming system and music player.”

SanDisk is currently sampling the new 4GB SDHC card to Original Equipment Manufacturers like major mobile phone manufacturers and mobile network operators. Besides, SanDisk has also made sure that engineering slots are available as of now, so that mobile phone makers can upgrade the firmware in their handsets so that memory slots can support the newly announced SanDisk 4GB SDHC card.

As of now, there are no details on the specifications or price of the SansDisk 4GB microSD High Capacity card. But when SanDisk makes an official launch, you will be the first to know it through Techshout.com