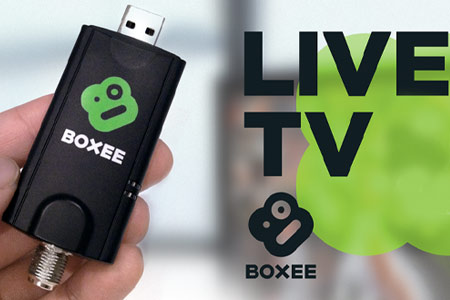 Waving a tempting line about allowing entertainment buffs to stray away from an expensive relationship with the cable guy, the Boxee Live TV tuner has begun shipping. Apart from announcing these tidings, a post on the company’s official blog also says that the Boxee 1.5 software update is being rolled out to users.

The TV tuner is designed to serve as an add-on to the company’s set-top box. The combination of both devices will allow fans to depend on websites such a YouTube, Hulu, Netflix, Vudu or Vimeo to watch entertainment on demand, while still being able to view live TV via channels like ABC, Fox, NBC or CBS.

It all waters down to users being able to pay solely for the content they watch and not the whole buffet delivered through cable TV. With the live TV dongle, there’s the opportunity to stay tuned to sports in real time, local news, special events and live TV shows courtesy of broadcast TV channels for free.

The peripheral will rub along with services such as social channel listings for letting people know what friends are watching and how many others are viewing a show. There’s a Live TV Timeline app which permits ‘passive sharing’ to Facebook, the ability to edit channels from a lineup and an all-in-one interface for switching between the web and broadcast TV.

As for the software upgrade we mentioned earlier, it will land with a fresh UI and enhanced search function. It also tows along browser pop-up management, Rotten Tomatoes integration, reworked library screens with better filtering and on-device social account pairing.

The Boxee Live TV price is marked at $49. The Boxee software v5.1 update may probably have reached all users by now.