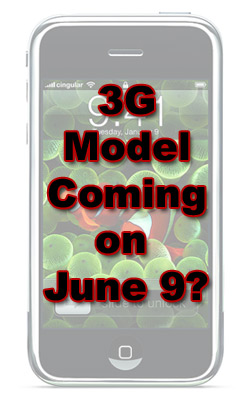 Most tech-savvies around the world are waiting for the 3G iPhone, which is rumored to launch soon. The latest news says that Steve Jobs is going to introduce it on June 9 during the keynote presentation at Apple’s WWDC conference.

Gizmodo has confirmed the rumors by saying “someone very, very close to the 3G iPhone launch has told me that Apple will announce their new model at the WWDC Keynote on June 9th.”

Earlier, the 3G iPhone was expected to release by the end of 2008. However, according to Gizmodo, the 3G iPhone will be available in the market right after its launch on June 9.

Moreover, the launch of the 3G iPhone may also bring new policies in the picture. Gizmodo says that the new version of the iPhone may not be available at a fixed price in some of the countries.

If this leaked news is true then the shortage of the iPhone is soon to be ended with the newer and better version of the model.