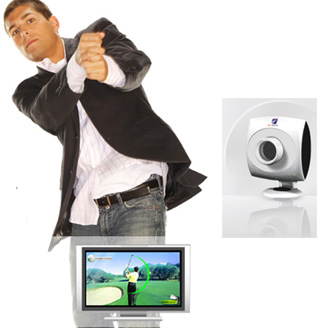 In the early part of December last year, we reported about the launch of the revolutionary ZCam, a real-time depth-sensing PC camera. Now, this very device was showcased by its manufacturer, the Israel-based 3DV Systems at CES 2008, and it has already sparked quite a lot of interest in a wide variety of people.

A number of people have compared the Zcam device with the science fiction movie Minority Report, which sees Tom Cruise playing a futuristic police officer who shuffles computerized information around simply by moving his hands and fingers around.

The innovative Zcam’s system is based on a small 3D camera which is placed below the computer screen and is programmed to track movement. The Zcam uses infrared and radar-like systems to sense distance and determine just exactly how far the user is, as well as what they are doing at the moment.

Thus, the Zcam is able to recognize hand gestures and the movement of fingers. This allows the user to control the activity on the computer screen just by flicking a thumb either left or right or by pointing fingers at the screen itself.

It is however not to be confused with the Nintendo Wii console and its motion-sensitive Wii remote controller, which allows players to interact with what’s going on on the screen simply by waving the controller around. On the other hand, the Zcam just detects movement without the need for any controller.

According to Zvi Klier, the chief executive of 3DV, “The Wii has shown us the way, but we can take things so much further. We think this is the next step.”

3DV, which has been working on this camera for the last 10 years, plans to release the Zcam to the public sometime this year. Most probably, it is expected to cost around $200.