As expected, the 32GB model of the Motorola Moto X second generation smartphone has been made available for purchase in India. The new handset is priced at Rs 32999 which is just Rs 1000 higher than what the 16GB option launched at.

Speaking of which, the lower storage model of the Motorola Moto X Gen 2 has been given a decent reduction in its retail cost. The phone which was tagged at Rs 31999 when it was released in September can now be purchased at Rs 29999. The 32GB option is also exclusively available via Flipkart. 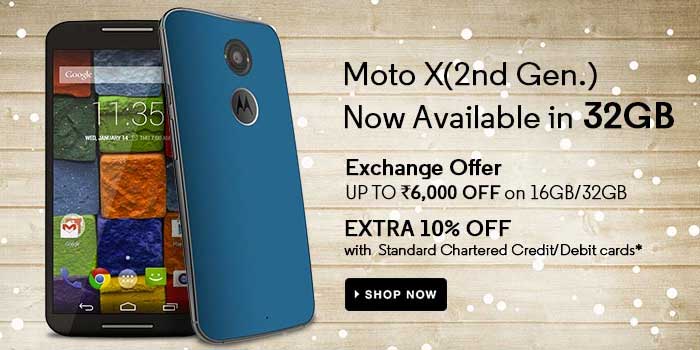 However, you’ll have to make do with the normal color options of black, white and blue as the premium finishes aren’t up for grabs for now. Except for double the internal storage, there isn’t anything extra onboard. The handset is one of the cheapest flagship phones on the market and while it comes running Android 4.4.4 KitKat out of the box, an update to Lollipop was already started rolling out in India.

The phone offers a near-stock Android experience similar to what you’d get on a Nexus smartphone. It offers a 5.2-inch Super AMOLED display with 1080p visuals and is powered by a 2.5GHz quad core Snapdragon 801 SOC. While the majority of specs are pretty impressive, the battery employed here is a disappointment.

Here’s a roundup of the Motorola Moto X’s specifications:

Head over to this link to purchase the Motorola Moto X Gen 2 with 32GB of onboard storage.