The 3G 32GB Asus Fonepad tablet has landed in India through an online retailer that’s selling the upgraded slate for a price tag of Rs 17,999. The new MRP not only brings in higher flash storage, but also a beefier processor that’s clocked at 1.6GHz instead of 1.2GHz. Like Samsung, Asus is still betting high on delivering voice calling capabilities in a tablet form factor and various other manufacturers are even taking a shot at this segment with budget-friendly offerings.

The original Asus Fonepad was announced back in February at the MWC and it reached the country towards the end of April, retailing for Rs 15,999. The revised 32GB model has the same form factor and no modifications have been carried out to it visually. However, certain details such as the weight and dimensions haven’t been specified. Well, since it’s identical to its lower capacity variants, the tablet should measure around 196.4mm x 120.1mm x 10.4mm and weigh approximately 340 grams. 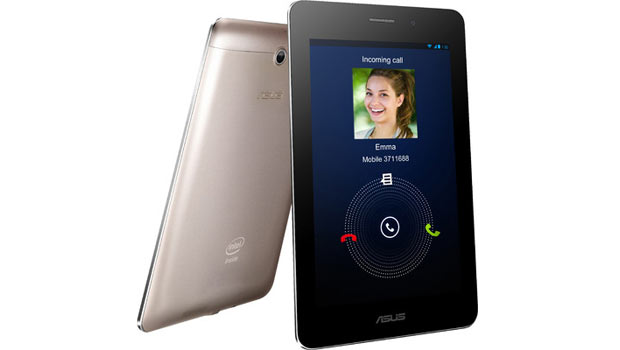 In a nutshell, the device has a 7-inch 1280 x 800p LED backlit IPS touchscreen, a 1.2MP webcam, a 3MP rear camera, 1GB of LPDDR2 RAM, an Intel Atom Z2460 SOC and PowerVR SGX540 graphics. The 32GB Fonepad still runs on Android 4.1 and whether it will be updated to the latest version of the OS is anyone’s guess. On a single charge of the 4270mAh battery, users can expect 32 hours of talk time, 751 hours of standby or 9 hours of video playback.

The Asus 32GB Fonepad hasn’t received an official unveiling in the country, but yet, it’s being offered through Flipkart for the aforementioned price. Available in champagne gold, the device is expected to ship in 2 to 3 business days.