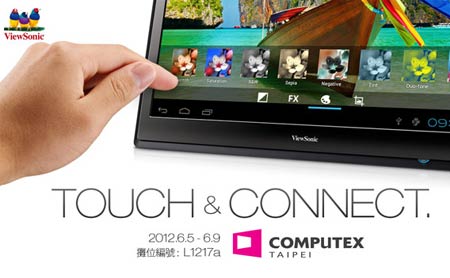 We’ve seen relatively large slates out there, but isn’t the ViewSonic 22-inch Android tablet a bit too large? Portability aside, this touch-enabled slab is dubbed as a ‘smart business tablet monitor’ by the California-based visual technology manufacturer.

The tablet was uncovered through a teaser which was recently released by ViewSonic. According to Engadget, the Ice Cream Sandwich powered giant is a prototype in the Touch and Connect series. This device will be officially unveiled at the Computex 2012 in Taipei on June 5, 2012. Like we already mentioned, the device in question is ‘one’ of the trial variants and the company apparently has plans of introducing a Windows 8 multi-touch display featuring similar dimensions of sort, along with cloud computing services, laser projectors and much more next month.

Being big on size, we anticipate the gadget to be high on performance as well, since the company’s calling it a ‘smart business tablet monitor.’ On the downside, no specific details on the hardware components have be made available as yet. So making speculations here is quite hard as previous devices from the company have been equipped with SOCs from various manufacturers such as Qualcomm, Nvidia and Intel. What’s for certain is that if ViewSonic goes for the Windows RT build of Microsoft’s upcoming OS on a particular variant, an ARM SOC could be inevitable.

Like we said before, the ViewSonic 22-inch Android tablet is expected to make an appearance at the Computex which is scheduled to take place on June 5, 2012 at Taipei. All those hungry for more details will just have to wait 10 more days, same goes for the price and availability.