2018 iPhone dummy units get shown off on video

Apple’s next trio of iPhones have been all over the place lately, leaking at a steady pace ahead of their September debut. The 3 handsets have now popped up in a video which features mockup versions of the smartphones.

Japanese blog Macotakara shot the video using mockups it purchased from Chinese retailer Alibaba. It’s not clear what these dummy iPhones are based on. Leaked schematics of all 3 came out recently, so it’s possible someone in China decided to make 3D models out of them. 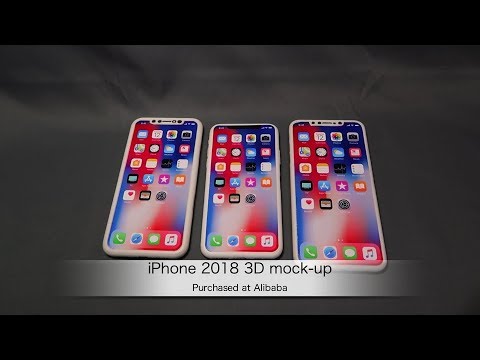 In any case, the prototype iPhones fall neatly in line with past rumors. The 5.8-inch iPhone X (2018) looks identical to its previous variant with only a 1.1mm difference in width. The publication points out that the dual cameras are slightly askew in the dummy version, but this might be a fault with the maker of the mockup and not Apple itself.

The 6.5-inch iPhone X Plus gets compared with the iPhone 8 Plus. As expected, it’s also nearly the same. The former is 1mm taller, 0.35mm thicker, and 1mm wider. It’s not clear if this will be a dual-SIM device, as reported previously. Apple has changed up the bottom half a bit.

Instead of an equal number of holes on both sides of the Lightning port, there are 7 cutouts on the right and 4 on the left. Again, it’s not clear if this is part of Apple’s design or a mistake on the creator’s part. The holes on the right of iPhones are generally reserved for the speaker, while the ones on the left are just for show.

Perhaps the iPhone X Plus will boast of louder speakers thanks to the addition of a few extra cutouts. Meanwhile, the 6.1-inch LCD iPhone seems to have a larger notch on its screen as compared to the iPhone X. The SIM card tray appears to have moved and the rear camera looks like it’s gotten bigger.

The microphone and flash unit are notably aligned vertically underneath the lens, a slight change from the iPhone 8. Macotakara also claims that Apple won’t ditch the Lightning connector for a USB-C one this year. According to speculation so far, the 2018 iPhones may instead replace the USB-A to Lightning cable with a USB-C to Lightning one.