Apple’s 2016 MacBook Pro has had its fair share of controversy ever since it was announced, with many expressing frustrations at some of the company’s choices. However, a new storm may be brewing now that consumers have started receiving the laptop.

According to several posts spread across Apple Support and MacRumors forums, several MacBook Pro units randomly behave erratically, flashing different colors or tearing up the screen before crashing. One user claims the Radeon Pro 460 graphics card in his MacBook Pro started freaking out when he used Adobe Media Encoder.

He apparently paid a visit to the Apple Store where he was told that it’s probably a hardware problem. He then proceeded to order a new MacBook Pro. He continued working with the old one, noting that there were no problems when he switched to FCPX or when he created a new project.

The project which had caused the affected MacBook Pro to crash had been created on an earlier MacBook Pro with an NVIDIA GPU. He went on to claim there’s still a strange graphics glitch when he restarts the laptop. His story is echoed by many who are also facing issues with Adobe software like Premiere Pro.

Even 9to5Mac experienced a similar problem, stating that their MacBook Pro began showing signs of tearing as the desktop background began showing through the foreground windows. Some owners say even Apple’s Photos app is giving them grief.

For instance, one user asserts that Photos was syncing 13k pictures when the entire system locked up suddenly and began violently flashing red and green hues along with a checkerboard pattern. There doesn’t seem to be a common explanation for all these glitches, with some suggesting hardware failures and others pointing towards driver issues. 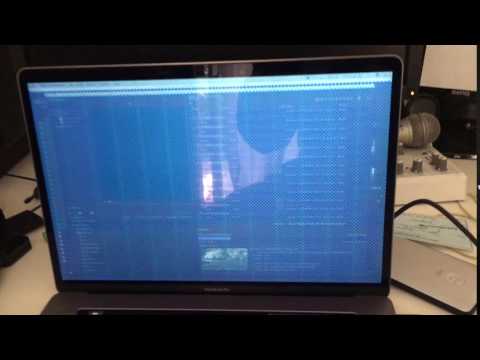