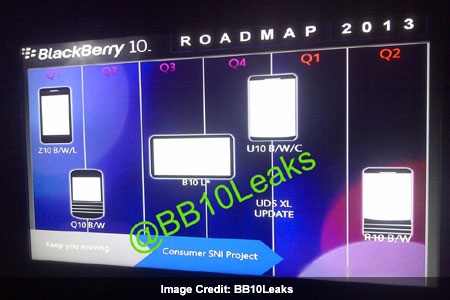 A mysterious road-map for BlackBerry 10 has been ‘leaked,’ and it seems as if the company is preparing more devices for launch this year, including what looks like a 10-inch tablet and a phablet, as well as a touch screen phone with a full QWERTY keyboard. Although this is an interesting little bit of information, it must be approached with a hint of caution.

With the Z10 now reaching an increasing number of customers, and the Q10 on the way, the Canadian manufacturer is poised to ease in new projects, if it chooses. There have been many rumors in the past about low-end Curves, upgraded tablets and even high-end flagships, but now we get to ‘see’ what the company has planned.

Several things can be taken from the leaked road-map. For one, it appears as though the company is developing what might be a 10-inch slate, which, if the rumor is accurate, should come around the third or fourth quarter this year. Another device dubbed the U10, looks as if it might be a phablet, or at least a tablet that could rival Apple’s iPad mini. That it will have network connectivity is purely speculation at this time, since there aren’t any real details on any of the devices.

And finally, we can see something very different from the bevy of handsets out there. This would be the point on which this rumor was hinged. The last one is a large handset with what is thought to be a full QWERTY keyboard. Labeled the R10, this might be a Curve-like phone, possibly falling in the mid-range category, and CEO Thorsten Heins may have hinted at something of the sort.

CrackBerry is reporting that the source of this information is a ‘random Twitter account‘ that has just ‘popped up,’ and if nothing else, makes for a good talking point in terms of the future of the company. We’re not sure how reliable the source is, but we’ll just have to wait for something more official.

Anyway, like with most rumors, we have to take this one about a BlackBerry 10 road-map with a pinch of salt. Either way, if these devices pan out, there will be plenty of apps ready and waiting on the store.