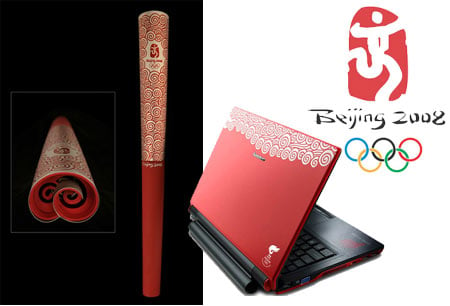 Plans are already in full swing ahead of the 2008 Beijing Olympics. And, no we are not talking about all the sports persons who are training well in advance for this great event that comes once in four years. We are talking about Computer maker Lenovo, who happens to be China’s only worldwide Olympic partner and has gone all out on its marketing campaigns.

According to Chen Shaopeng, Lenovo’s senior vice-president and president of China operations, “In 2007 and 2008 all of our marketing campaigns will be focused on the Olympic Games.”

In fact, in 2004, Lenovo signed a deal with the International Olympic Committee to join the sponsorship program.

According to Lenovo, the design team, which consisted of an international group from Germany, Singapore, the U.S., and Japan, spent more than 10 months working on the torch design.

And, that is not all. Lenovo has also said that they would most likely introduce a personal computer to go along with the “Cloud of Promise” theme.

Images of the PC have already being doing the rounds on the Internet. This PC sports the same design that is found on the back of the Lenovo-designed torch. In the corner of the notebook is what appears to be an Olympic logo.

We are sure that Lenovo will release more information on this laptop once we get closer to the 2008 Beijing Olympics. So stay tuned.