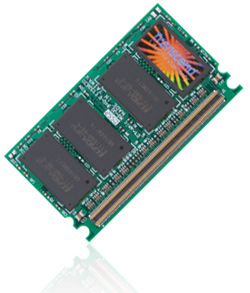 Transcend Information Inc., has introduced its 1GB Hi-Speed DDR2-533 Micro-DIMM Memory Module for Notebooks that apply Intel’s Centrino Duo platform. The 1GB DDR2-533 Micro-DIMM Module is developed, so that it is only 65 per cent the size of a regular SO-DIMM (Small Outline DIMM) commonly used in notebooks; however it has the same memory capacity. The introduction of this higher capacity 1GB module will further speed up the manufacture of lighter and smaller Notebooks such as, LG’s T1 Express Dual, which has increased functionality and longer battery life.

Transcend’s Micro-DIMMs incorporates the latest 214-pin “mezzanine connector” technology, which cuts down the size of the module by approximately 40 percent when compared with an SO-DIMM. Transcend’s 256MB to 1GB DDR2-533 Micro-DIMMs enhance performance considerably and increase your system’s overall stability. All of Transcend’s DDR2-533 memory modules follow the standard developed by JEDEC (the Joint Electron Device Engineering Council), the memory industry’s standards organization. With the Transcend DDR2 Micro-DIMM module, you and your notebook will get several benefits, such as lower power consumption, which can improve battery life and help achieve better overall performance.

Transcend has not disclosed any details on the pricing for the 1GB DDR2-533 Micro-DIMM (PN: TS128MMQ64V5Q).