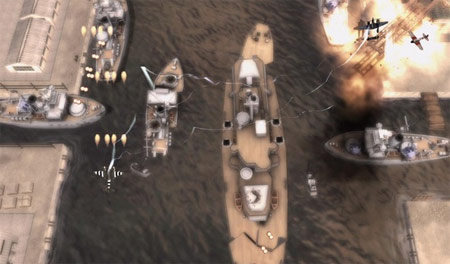 Capcom Entertainment has dropped the bomb and has announced 1942: Joint Strike, a down arcade shooter game for the Xbox 360 and PS3 consoles. The game has been inspired by the 1980’s 194X series of World War II-themed vertical arcade shooters.

Even though the art, sound and gameplay of 1942: Joint Strike takes cues from the original 194X games, this new game will definitely be a unique one. Expect the gameplay to be 2D, but even better is the fact that the game uses a fully 3D engine.

1942: Joint Strike is set in a World War II-themed location, complete with many stages, vehicles and weapons that carry the look and feel of WWII.

However, the world in which 1942: Joint Strike takes place is not our own. This is an alternate world where history and technology developed along their own paths. Players will see themselves jumping into the cockpits of WWII-era aircrafts to take on huge waves of incoming enemy fire, dodging explosions and missiles while challenging huge bosses at the end of each stage.

Further, 1942: Joint Strike also offers gamers a new 2-player co-operative mode which will allow one to combine the powers of two aircrafts into a devastating barrage.

This game also has a brand new scored created by Norihiko Hibino, an international composer and better known for his music creation for the Metal Gear series.

1942: Joint Strike will be available as a download on Xbox LIVE Arcade and the PlayStation Network in summer 2008.