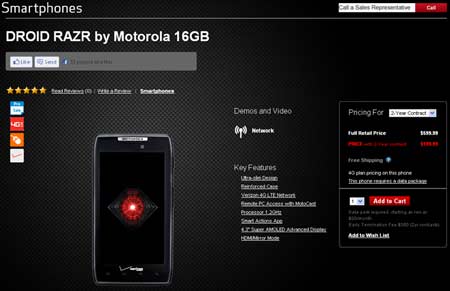 The Verizon Motorola Droid Razr 16GB variant’s price on the carrier’s official portal has been dropped to $199. This happens to be the black hued handset, while its 32GB version continues to hold the original $299 price tag.

The company had earlier let slip that when the purple Droid Razr makes an appearance on the website, it would be tagged at $199. Besides the black Droid Razr that’s purchasable now, the one dipped in white will also see its price slashed down to $199, but the drop will come into effect from January 23 onwards. Potential users who had second thoughts with regards to purchasing this mobile phone can now get their hands on the 7.1 mm sleek device for a lower amount.

The handset is adorned by a 4.3-inch Super AMOLED Advanced display designed with Kevlar fiber as well as Corning Gorilla Glass for making it scratch resistant. Possessing 4G LTE capabilities, it runs on the Gingerbread platform which is upgradable to Ice Cream Sandwich. The smartphone can also serve as a 4G LTE mobile hotspot for as many as eight Wi-Fi enabled devices. 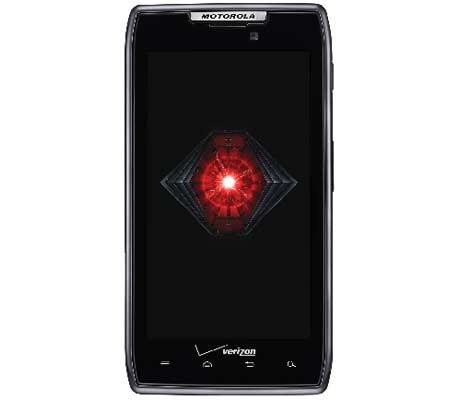 Apart from integrating a front facing HD snapper, the phone sports a primary 8MP camera proffering 1080p HD video capturing abilities along with an image stabilization feature. Photographs snapped up on it can be hoarded on the onboard 16GB memory, while the external storage can be expanded up to 32GB by incorporating a microSD card.

As mentioned earlier, the black, 16GB Verizon Motorola Droid Razr price sums up to $199 and it is now selling through the network operator. The purple Razr will become available from January 23, while the white version’s price will drop to $199 from its current $299 tag on the same day.