Lexar Media has announced a 16GB flash drive named as the JumpDrive FireFly USB. Also available in the capacities of 1GB, 2GB and 4GB, the FireFly is compatible with both Windows and Mac. 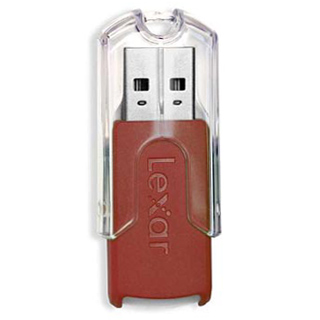 To make it easy-to-carry and drive comes with keychain hole to be attached with a key ring. The drive is capable of high-speed transfer, sharing and storing files and documents, MP3 music, videos and images in the vast 16GB space. The drive is available in four-different colors for four different capacities. The 16GB is available in a red-hot color.

Darrell Hill, senior product marketing manager at Lexar Media, noted: “The new 16GB JumpDrive FireFly drive is a bold new step in storage for Lexar. Whether you’re a student with tons of notes, a blogger with a collection of video clips, or a mom with an online family album full of digital photos, our stylish new 16GB JumpDrive FireFly drive lets you keep your precious data and media files on hand while on the go.”

The 16GB Lexar JumpDrive FireFly drive is expected soon for a suggested retail price of $99. The drive on other capacities of 1GB, 2GB, 4GB and 8GB will be also made available, however, their price details have not been revealed.