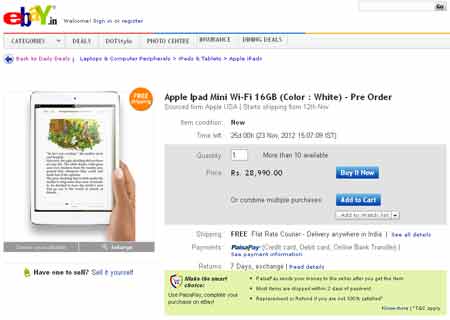 The iPad mini price in India has surfaced, online retailers are offering the 16GB version of the tablet for pre-order.

The tablet was unveiled at an event on October 23 along with various other devices such as the fourth generation iPad, a new Mac mini and a refreshed MacBook Pro amongst others. Pre-orders for the slate have already commenced in the US through the Apple Online Store and via carriers including Sprint. In recent news, the Wi-Fi version of the device was reportedly sold out.

Just to make things clear, Apple is yet to announce the device in the country, while the iPhone 5 is slated to debut next month. Coming to the tablet’s specifications, it houses a 7.9-inch LED backlit IPS display proffering a resolution of 1024 x 768 pixels, a fingerprint-resistant oleophobic coating and a pixel density of 163ppi. In terms of dimensions, it measures 7.87 x 5.3 x 0.28 inches and weighs not more than 308 grams. An Apple A5 dual core processor takes charge under the hood and it’s accompanied by various features such as a 5MP camera with 1080p video recording and approximately 10 hours of battery life amongst others.

The 16GB Wi-Fi only iPad mini tag amounts to Rs. 28,990 through eBay.in. Based on information provided by the seller, the device will start to ship on November 12 if pre-ordered today and its expected release date is said to fall on the 20th of next month.