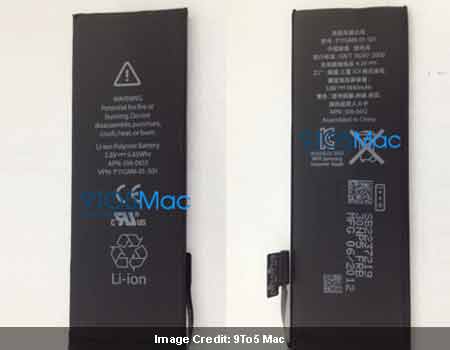 Besides the iPhone 5 logic board, another component of the forthcoming device that has been leaked is its 1440mAh battery. This thin power pack of 3.8v is naturally of a higher capacity than those found in the previous generation phones.

9To5 Mac notes that the battery is of higher capacity as compared to 1430mAh and 1420mAh ones in the iPhone 4S and 4, respectively. The voltage has been increased from 3.7v to 3.8v and the watt-per-hour measurement is now 5.45. The image reveals that the battery was manufactured in June this year, the timeline being said to coincide with the production of other components of the next generation Apple smartphone.

As we have reported earlier, Apple is apparently planning to incorporate support for LTE network connectivity. The faster network is likely to hog a lot of power and this could be the reason behind augmenting the battery capacity. It supposedly has a thin form factor in order to maintain a sleek profile despite the higher capacity.

Along with the recently revealed logic board and the battery, a number of other components in the next generation iPhone have been leaked to the web. Apparently, Apple has done away with its 30-pin port and has instead employed a 19-pin dock connector. But some time ago, it was reported that the company decided to save up on even more space and has traded the 19-pin port for an even smaller dock with merely 9 pins. A video of the unibody backplate of the phone has also been doing the rounds of the internet.

If some other speculations are to be believed, the Apple iPhone 5 will be making its debut in September this year, 1440mAh battery and all.