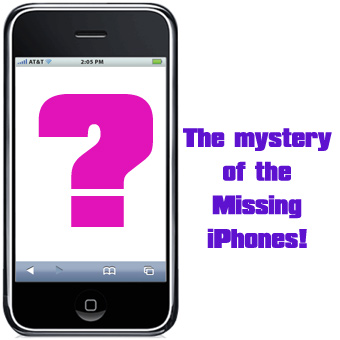 The mystery of the missing iPhones! Well this would perhaps be “the” exceptional case where there are no rewards on locating the missing person or thing. Wondering why, it’s simply because they aren’t literally “missing.” Don’t get so bewildered, just read on to know what I am speaking about.

1.7 million iPhones have gone missing, according to the sales reports issued by Apple. By missing we don’t imply stolen, but mean that these 1.7M devices have been sold but were never activated via AT&T, the official and exclusive network carrier of the iPhone. Apparently, the missing phones have been hacked and unlocked.

According to Toni Sacconaghi, an analyst at Bernstein Research, Apple maintained to have sold 3.7M iPhones till 31st December. However when he checked on the actual activations through AT&T it was revealed that only 2 million devices were activated, leaving a mystery on the rest of the 1.7 million pieces.

Though the move remains the same, the reasons could vary. Ezra Gottheil, an analyst at Technology Business Research Inc, stated “Some unknown number of iPhones are being unlocked by purchasers and some, probably a large number, are being unlocked for resale.”

Yet another research carried out makes known that approx. 1 million iPhones may have been unlocked.

The real truth in terms of numbers as well as the exact reason behind the missing iPhones is not yet clear. Though an ecstatic Apple has always made it a point to outnumber its own previous sales in every new quarter, the above reported news surely seems to be a matter of tension for the company, especially when it comes to matters like profit and prominence in the market.