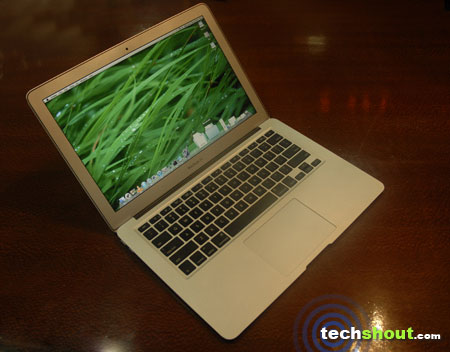 One of the many reasons for having the 13-inch MacBook Air (2011) in our review labs is because Apple likes keeping its gadgets up-to-date. Take the new iPad or the iPhone 4S for instance. And when Cupertino has something fresh up its sleeves, we’ve got to have it. This addition may look no different from the previous generation MacBook Air, but believe us when we say there’s a powerhouse hidden within. Super slim as it is, the release fits well into the newfangled Ultrabook category. It’s the latter which stands as the competition, putting in great efforts to reign supreme alongside Microsoft’s Windows OS over the Mac. So can these sleek contenders beat Cupertino’s slimmest notebook yet? Let’s hear what the refreshed Air has to say to that. 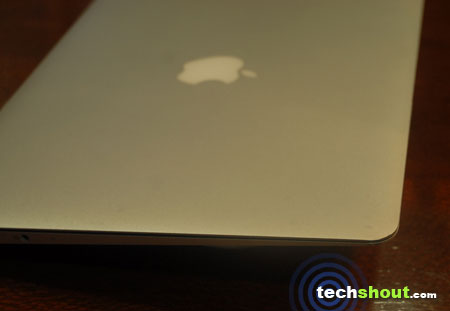 Compared to its predecessor, there’s a lot different in the new 13-inch MacBook Air (2011), specifications-wise. Firstly, the model we received is equipped with a full-size backlit keyboard that has a built-in ambient light sensor to automatically detect changes in lighting conditions and carry out the necessary adjustments. Apple has also thrown out the Intel Core 2 Duo processor to make room for a dual core Intel Core i5 substitute that’s clocked at 1.7GHz with 3MB shared L3 cache. To beef things up even more, the high-end model is configurable with a dual core 1.8GHz Core i7 alternative, exclusively through the company’s online store. Memory-wise, options of 128GB or 256GB in flash storage are also brought in tow. We had the privilege of getting hold of the higher capacity SSD in our review unit. 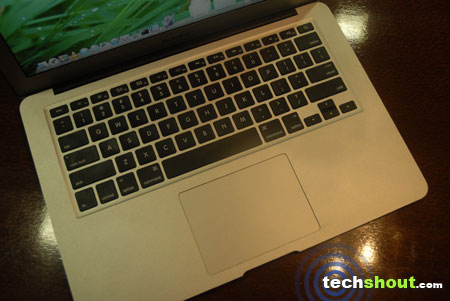 For graphics processing and better multitasking, Intel HD Graphics 3000 and 4GB of DDR3 RAM operating at 1,333MHz, are employed to carry out the respective jobs. The built-in Wi-Fi b/g/n adapter keeps the device well connected to the internet. Other components include an HD LED backlit glossy widescreen display that has a native resolution of 1440 x 900 pixels, a multi-touch trackpad and the FaceTime camera placed under the lid. Distributed along the left and right edges of the laptop are the SD card slot which is specific to the 13-inch model, the MagSafe charging socket, the Thunderbolt port in place of the Apple Mini DisplayPort, the headphone jack and a couple of USB 2.0 ports. Where dimensions are concerned, both the late-2010 and mid-2011 models are almost identical in size, though the latter does weight a bit more at 1.35kgs. That’s merely a difference of 3 grams.

So far, Apple has done quite a good job with the specifications sheet alone. We’ve unboxed the laptop to find nothing more than a quick start guide, warranty information, an AC power cord and a 45W MagSafe adapter as it companions. More than its hardware offerings, the Air is known for its stupendous design, something that a few competitors envy and try to imitate. Well, we won’t be the ones to point a finger, but it’s hard not to think of the Asus ZenBook UX21E laptop which seems to have played copycat. On the other hand, the Lenovo IdeaPad U300s and new Samsung Series 9 notebooks appear to have taken the drawing board into high consideration while trying to offer some stiff competition to Apple’s notebook. 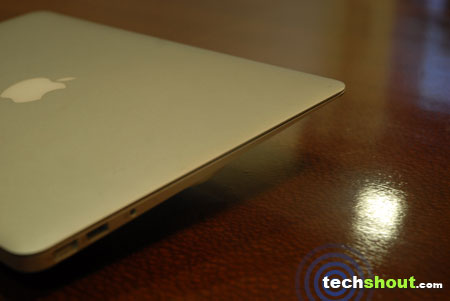 The durable unibody construction still persists on the 13-inch MacBook Air (2011) as well as its smaller sibling. The light silver shade spreads over the entire surface, lending a really smooth and indefinitely professional look. Since the notebook is crafted out of aluminum alloy, you’d expect it to keep things as cool as possible – which it does. Moreover, the anti-gloss exterior makes a strong stand against finger smudges. At its thickest end, the device measures just about 0.11 inches and slims down to a mere 0.68 inches on the tapering front. Further dimensions read as 12.8 inches and 8.94 inches for the width and depth, respectively. 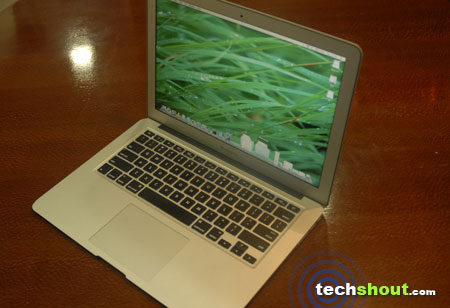 The 13-inch MacBook Air (2011) starts up in less than 20 seconds and hardly takes around 2 to 3 seconds to come around from the sleep mode. If you were expecting a better display compared to the previous generation Air, we hate to break it to you, but the laptop still retains the 13-inch LED-backlit panel from its predecessor. We’re hoping for a full HD replacement with the next refresh though. Nevertheless, images and videos portray themselves crisply and clearly. However, we did experience sluggish playback while streaming clips online. 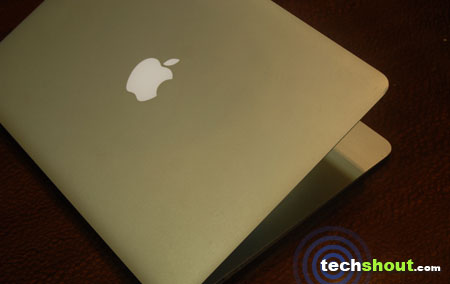 On the software front, the Mac OS X Lion brings in a number of improvements and features. The multi-touch gestures caught our attention more than anything else. For a laptop with such dimensions, the glass touchpad is comparatively large. It makes navigating through the interface a breeze. Besides availing of the normal functions like pinch to zoom, scrolling through web pages, rotating images and so on, we could also conveniently flip between running apps, pinch the surface with 4 fingers to access the Launchpad and do a 4-finger swipe in the upward direction to open the Mission Control menu. Dedicated quick access keys are placed on the keyboard for the latter two tasks. The speaker system employed is literally undetectable. And in spite of being concealed within the casing, the audio clarity is really good and enjoyable.

The level of illumination can be custom-set for the backlit keyboard through quick access keys.

The funny part here is that the bezel surrounding the screen makes the notebook’s lid look bigger than its lower body.

The omission of USB 3.0 ports is likely to give the competition the upper hand on the connectivity angle.

During the several hours we spent testing the laptop, we barely managed to hear a peep out of it. On the downside, we aren’t really impressed with the battery performance. With less than moderate usage of basically browsing the web, viewing a few videos, listening to music and playing around with certain offerings, the 13-inch MacBook Air (2011) fell to 33% of battery life over a span of 6 hours out of which, the notebook remained idle for a little over two hours. It might not be a gaming rig or even capable of outperforming the MacBook Pro series, but the latest Air is certainly a really good pick for business and entertainment purposes. An 8.9 out of 10 rating is what we’re giving Apple’s slimmest laptop yet. You can pick up the low-end model for around $1,299, whilst the high-end variant price amounts to approximately $1,599 in the U.S. For customers in India, the Air is available at a starting price of Rs. 56,900.