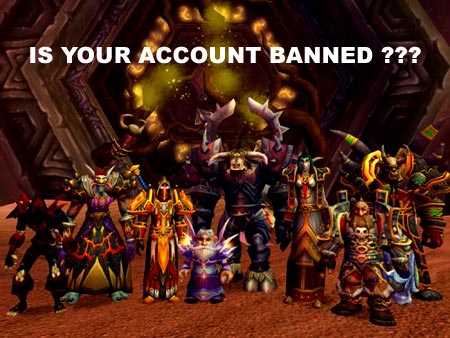 Blizzard has reportedly banned 105,000 accounts thanks to the ongoing cheating and other various malicious activities.

This news of new World of Warcarft users account being banned comes from the official WoW site:

In our continued efforts to combat cheating in World of Warcraft, more than 105,000 accounts were closed and over 12 million gold was removed from the game economies in Europe, Korea, and the US in the month of November. The closed WOW accounts were associated with activities that violate World of Warcraft’s Terms of Use, such as using third-party programs that allow cheating, and farming gold and items. These types of activities can severely impact the economy of a realm and the overall game enjoyment for all players.

We will continue to aggressively monitor all World of Warcraft realms in order to protect the service and its players from the harmful effects of cheating. Please note that selling World of Warcraft content, such as gold, items, and characters, can result in a permanent ban of the involved accounts from World of Warcraft.

Many WOW account closures come as the direct result of tips reported to our GameMasters in game or emailed to our Hacks Team by legitimate World of Warcraft players. If you suspect that a World of Warcraft player is using an illegal third-party program to farm gold or items, or is otherwise violating our Terms of Use, please report the suspected infraction via one of the means listed above. All cheating reports will be investigated, and those that prove false will not result in corrective action.

Hmm, Christmas is surely a time for surprises!