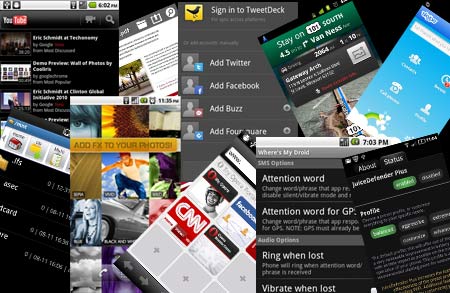 There may be many reasons why you may want to run through our list of the 10 best free Android apps to download. For one, the Android Market is quickly catching up with Apple’s App store in terms of the number of applications it offers. And if you aren’t game for staying posted on the regular entrants, it can get quite confusing to know just which application is right for your phone. Top this up with the ‘free’ label attached and you’ll be left saying to yourself ‘this one’, ‘no this one also’…so on and so forth. Here’s which we think are the 10 best Android apps to download in no particular order.

Adobe Reader: Probably one of the most downloaded apps from the Android Market, Adobe Reader, can easily claim to be one of best PDF viewers for both tablets and mobile phones based on Google’s OS. Whether you want to bookmark a page or hop onto a particular page, the app delivers. Working for most parts minus any glitches, it’s a great pick.

Tweet Deck: Twitter, Facebook, Foursquare…those who have profiles on a range of social networks can find solace in the TweetDeck for Android application. It streams content in a format easy to read and manage. Users who spend an ample amount of their free time or let’s say just time on the web are going to like the social browser for keeping them updated in a convenient manner.

Google Maps: There’s something about Google Maps on Android phones that makes it a must-have. Along with free and voice-guided GPS, the application also does its bit by bundling in the Places and Latitude feature as well for recommendation and check-in to places respectively. All you’re going to have to worry about is enough memory space in your device and nothing more.

Skype: With video calling still unavailable for a range of phones, you may want to check your handset’s computability before you give Skype for Android v2.1 a go. In fact, many new phones have been added just recently to the existing list. Like its desktop version, you have the advantage of engaging in free Skype-to-Skype video calls while phones can also be called at affordable Skype rates.

YouTube: ‘The latest version of the official YouTube app, now with in-page playback!’ seems to sum it all up on why you may want to download this application should you not already have it on your phone. The highlight of this app is without doubt its user interface that ensures watching videos is not just any mundane activity. A completely re-hauled player control and easy rotation for full-screen playback are some other interesting features included in the app.

ASTRO File Manager: Pictures, music, videos and loads of other files – phew! There’s hardly anything we don’t want a copy of in our smartphones and that’s just where the ASTRO File Manager comes handy. Allowing easy management of content, the app brings to the table attributes like Zip Tar, file and/or app backup, downloader and search files.

PhotoWall Live Wallpaper: No sooner had we downloaded it, we fell in love with the PhotoWall Live Wallpaper application. Adding that extra zing to an otherwise boring homescreen has photo effect options too. You can have photos showcased as the wallpaper and even set them to change automatically with this free Android app. What’s more, it also supports Picasa web album now.

Wheres My Droid: This is the app to download if you’re among the handful that frequently sees themselves asking ‘Wheres My Droid’ in a real world scenario more often than they’d like to. Keeping to its name, the application works just fine for those who’ve lost their handset. Features are inclusive of being able to turn the ringer on and also getting the GPS location of the phone, all via a simple text message.

We haven’t called the above the 10 best free Android apps you can download for nothing. With usability among the factor that stands out the most, all applications being available as a free download from the Android Market makes them all the more likeable. Try the applications yourselves and let us know what you think of them.