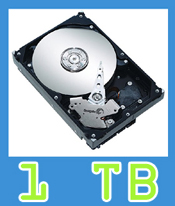 A long time ago we had reported that Seagate had released a 750 GB Hard Disk Drive (HDD) released by Seagate. Today they have taken one more leap and have confirmed a 1 TB HDD. That’s 1024 GB!

Seagate’s 1TB Barracuda will run on the perpendicular recording technology. What it basically does is pack bits firmly onto the magnetic platter by placing them perpendicular to the platter as opposed to linear recording which positions bits horizontally. Seagate had to say this about the 1 TB HDD:

“Seagate’s 1TB hard drive will be our second generation 3.5-inch hard drive to feature capacity-boosting perpendicular recording technology, and it will use fewer heads and discs than similar-capacity products we expect to see from our competitors. It is clear that fewer heads and discs, along with our proven perpendicular technology, can increase drive reliability, and also reduce operating temperatures, power consumption, noise, and weight.”

1 TB is surely a lot of space to store your data, around 1000 movies or 350,000 songs. Seagate will release the 1 TB HDD in six months but still it will be way ahead of its completion. No price details have been released for the Seagate 1 TB Hard Disk Drive but keep watching this space. We will keep you updated about this mammoth.