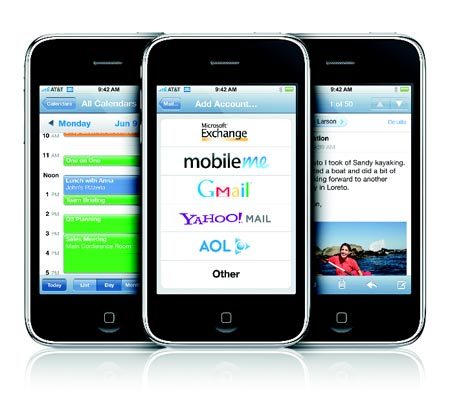 The 3G iPhones were launched with a lot of fanfare surrounding them all over the world. While the gen-next phone was heavily criticized in half of the blogosphere, the rest ordained as the cut above the rest.

However, according to what the company has announced, it seems that the Apple CEO will be laughing his way to the banks as the company sold out a whopping 1 million 3G iPhones (picture courtesy Apple) within 3 days of its launch!

“iPhone 3G had a stunning opening weekend,” said Steve Jobs, Apple’s CEO. “It took 74 days to sell the first one million original iPhones, so the new iPhone 3G is clearly off to a great start around the world.”

The twice as faster phone was launched on July 11 in 21 countries that consisted of Australia, Austria, Belgium, Canada, Denmark, Finland, Germany, Hong Kong, Ireland, Italy, Japan, Mexico, Netherlands, New Zealand, Norway, Portugal, Spain, Sweden, Switzerland, UK and the US and will be made available in France on July 17.

Not only is the 3G phone getting popular, the Cupertino officials have also witnessed the soaring popularity of the new App Store services with the downloads hitting the 10 million mark since the Store’s launch last week. The App Store now offers more than 800 native applications out of which more than 200 are offered for free and more than 90 percent of applications are available for less than $10.

Its party time at Cupertino!